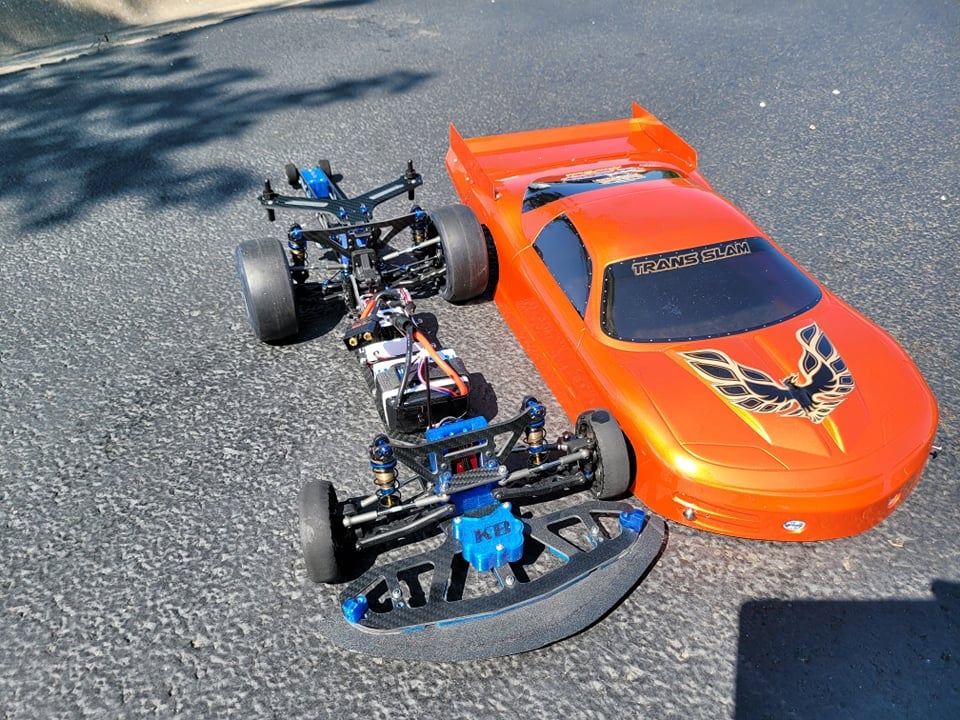 I wanted to bring the name Dream’Rekker to your minds. Time doesn’t slow down or give us anymore then 24hours in a day. It has definitely been a busy couple months.

A while back I showed some shots of the NPDR project we had brewing. Such a fun project and I love the designing side of things. New England’s weather is starting to change and the asphalt is getting colder now. That doesn’t mean I’m not pushing forward with the addition of drag racing products to our line. Locally I will lose our testing ability here but that doesn’t mean its not being tested.

July started this project for me, actually June I believe it was when I got my hands on the TLR donor car. Three weeks later I had the first mock up of the car then followed the carbon fiber. After finding a local driver to give this thing a shakedown I started working on the AE version. Luckily building piggy back to her testing I was able to find the hidden errors. She was perfect for finding my mistakes and we figured a lot of them out with her experience. Also finding them in the TLR I was able to improve them as I built the AE at home. That also meant I could carry them into the TLR version and know they worked.

Starting the AE project brought me a driver out of Illinois area that was looking to try the AE version as soon as it was ready. He gave me a time frame he would love it for and planning it out I could do it. Still tweaking the TLR version and working those into the AE it was busy time.

My goal back in June/July was to bring a couple testers out with them and tweak what it needed. Doing that I was aiming for a September soft release and I was on track for that. But plans always can change and for the reasons I had, this one was changing.

After talking with another fast driver with much more history in drag racing then me I decided September was rushing things. This Oklahoma driver was watching my teaser shots and nudging at getting his hands on one. I knew pushing this car out September wasn’t going to benefit anyone. I wanted this to be a hit right from the rip. Design wise I was 99% confident in it, materials and tuning abilities I am 99.97% confident in it all. My OCD wanted that last .3-1% more of confidence.

Going back to our weather here in New England. I just wont get the drivers time to feel 100% but with these 2 other drivers I knew I could. Already in the short month the AE version has been in Illinois the feedback has been great. Driver confidence in the car is high and the details he has given me has helped me make rolling changes to both platforms. Heres a little shot of his Shark Bodies TranSlam.

This week I finished up cutting all the parts for 2 more TLR test kits making their trip to Oklahoma. These 2 Im stoked to hear feedback and reports on also.

What time frame am I looking at now? To be honest I havent set a new one. My idea is for a New Year release, January is looking like my new goal. With the feedback I can gather in the next couple months and a 4th TLR version going out to a tester soon, Im pretty confident on that time frame.

I have to say in my own personal experience of what bothers me is when designers leave doors open for tuning. When I see things that could help add tunability but not bothered to be added it pains me. Most of the time its really because a designer may think his setup is the best. And it may be but not every driver is the same. What one doesnt think could help him another may find does. Why not put the option there?

I try to do that in all my designs. Leave nothing for the next version and give racers all the tools possible. I believe I did this with our Dream’Rekker car. little break down of what I put into this and why.

Weight boxes, they arent just those pretty printed parts. These fun boxes can hold up to almost 120grams of tungsten slug weight each. I saw drivers slamming batteries forward then adding sticky weights to the rear for traction. Why? I know why but why. Making minimal weight is different then weight for tuning. Leave that battery back and add less to the rear for traction. Use the front box to balance your bias or vice versa. Driver Options.

Front end I think is the key feature for this car. Remove 4 screws and the entire front clip is removable and/or replaceable. Need to work on the front and not have a 3 foot car hanging off you? Pull the screws and drop the clip off. This also makes replacing a front collision repair even easier and cheaper. No more having to replace the entire chassis.

Side rails for strength and flex tuning. There is actually functional benefits from our rails while not sacrificing strength.

Wheelie bars were a big deal for me. I saw a lot of shock bar setups out there but I was also seeing almost as many locked bar setups. Getting funky on the creative side our bar is actually usable in both configurations. One way you can mount shocks and have full usage of tuning. Take the bar off and flip it over, now you can

add locked tierods. You still get the angle adjustment for tuning and have a locked bar. Tie that together with our 3d printed bar mount and included trans spacer its like 4 tools in one.

Big spur little spur and the waterfall vs motor plates. A lot of thought into all those and I came up with a longer motor plate with a way to remove the waterfall and not effect chassis flex. Or if drivers wanted they could introduce flex there for options. Like I said I hate seeing tuning options not used in designs.

Even our rear body mounts are tunable. Whether it be sliding them forward or backward to find your best trunk line. We 3d printed some adaptors to even use the Losi 22S body posts for adjustable height. Or if you wanted regular posts theres a single hole each side. Adjustability right down to the body mounting. Like I said, I tried to think of everything.

Those are just some highlights in our design with other hidden gems I dont wanna speak to much about yet. It is definitely going to be an exciting winter hearing the input of these other drivers. Myself this winter will be touring car and 12scale racing to expand our products and skill in that corner.

Look for more info as tunes and tweaks come along and we approach a release date.